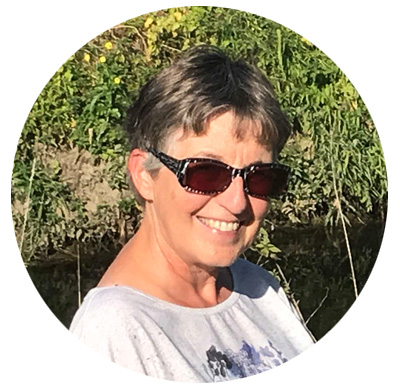 Mia will be our guide today. She was born and raised in Tienen and has spent the entirety of her career working at Tienen's famous Sugar Refinery. She’s actively involved in club life and feels intimately tied to the green landscape of the Hageland and the Gete River Valley. Even if it's just for a quick nip out, Mia is ready with her walking shoes laced or her bike at hand for a trip through the region.

What is it that makes this your favourite cycling route?

[Mia:] ‘It’s because the River Gete Valley is an unbelievably gorgeous region that’s astonishingly diverse. Fields, forests and orchards, meadows roamed by grazing sheep and cows and other animals peering out at you: you'll cycle past it all! It’s a lovely, rural landscape with a rich history.'

[Mia:] ‘The route is nearly 42 kilometres long, which is just enough of a stretch to do in half a day. However, you could just as easily make a day trip of it and take your time moseying about and exploring the unique stops along the way just a bit more closely. It’s definitely worth spending a while at Het Vinne Provincial Domain and walking around the lake and marshlands. Strolling through Tienen is also well worth the effort. There are more than enough great stops to be made.' 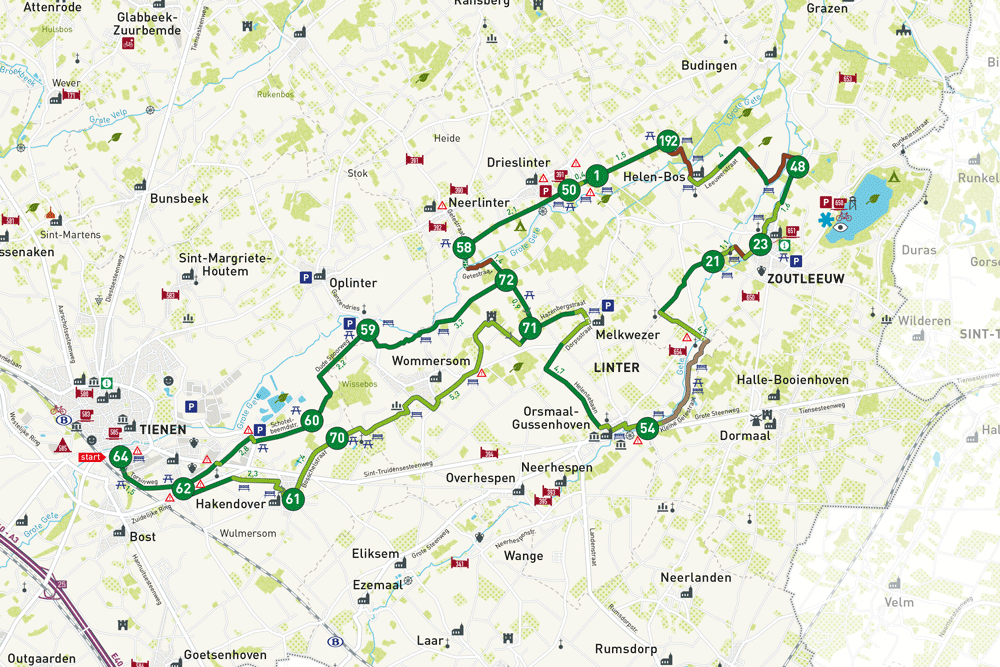 Could you briefly describe the route for us?

[Mia:] The best spot to begin your journey is at the lovely old ruins of the Paterskerk - also known as Tienen's Church of the Beguinage. You'll find it at node 64. Parking is available there; however, hiring a bike at the tourist office, located at the Grote Markt in Tienen, is just as good an option. You'll have no trouble at all getting to the church from the town centre. If you make an appointment in advance, you can combine your cycling route with a guided tour of the Tiense Suikerraffinaderij (Tienen Sugar Refinery), not too far from your point of departure. [Do mind, this guided tour is only available during the sugar beet harvesting season: from September until December.]

It won’t take you long to reach Grimde and the chapel of Our Lady of the Stone (Onze-Lieve-Vrouw-ten Steen), an ancient and famous pilgrimage site. At Grimde's former railway station, you can learn all about life during the World Wars from the information board posted there. With the advent of the First World War, the Gete Line of Defence played a crucial role in this regard. If you'd like to find out more about this period, you should stop at the Museum of the Lancer's Third Regiment in Orsmaal (near node 54) and the Vredeskerkje van Helen (Peace Church of Helen) situated between nodes 21 and 54.

The former train tracks run along the car-free 'IJzeren Weg' (Iron Road) and will lead you to the town of Zoutleeuw (node 23) with its beautiful historic town hall and St. Leonard’s Church: it's nothing less than a marvel of true medieval charm. If you like, you could take a short detour and pay a visit to Het Vinne Provincial Domain. On the playground and in the play forest, children can let loose and run wild, or you could spend an hour walking round the lake. Walk along the corduroy roads across the water and pass through the meter-high reeds strewn along the way. In spring, the water birds hatch from their eggs and the marshes are all abuzz with their twitter.

From this point on, the route starts to wind its way through the open and green landscape to the villages of Helen, Melkwezer, Wommersom, and the pilgrimage village of Hakendover, leading you back to where you started. 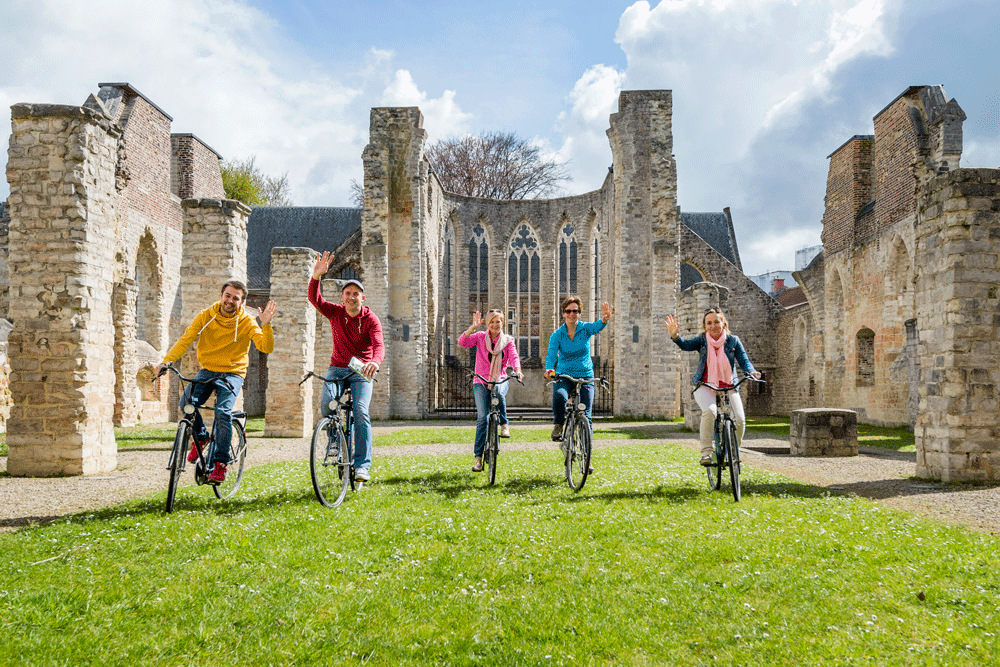 Are there any fun anecdotes or intriguing facts that you’d like to share in relation to this cycling route?

[Mia:] My husband Hugo and I were on our way through the Gete River Valley when we saw approaching at a gallop on the bike path in the distance. It ran straight towards us. As it approached, we saw that it was without rider. Hugo is an experienced rider and has had lots of practice working with horses. He stood there in the middle of the path, his arms stretched wide. I stood there by his side, waiting with him. The horse saw us and slowed its pace, and with Hugo’s gentle efforts, the horse was calmed. A short while later a girl showed up. The horse had been startled by something and had thrown her from its back. She was so thankful that we had managed to rescue it.

From time to time, we also cross paths with a flock of sheep who've lost their way. Anytime you’re in the Gete River Valley you should expect to find an animal waiting along the path for you. 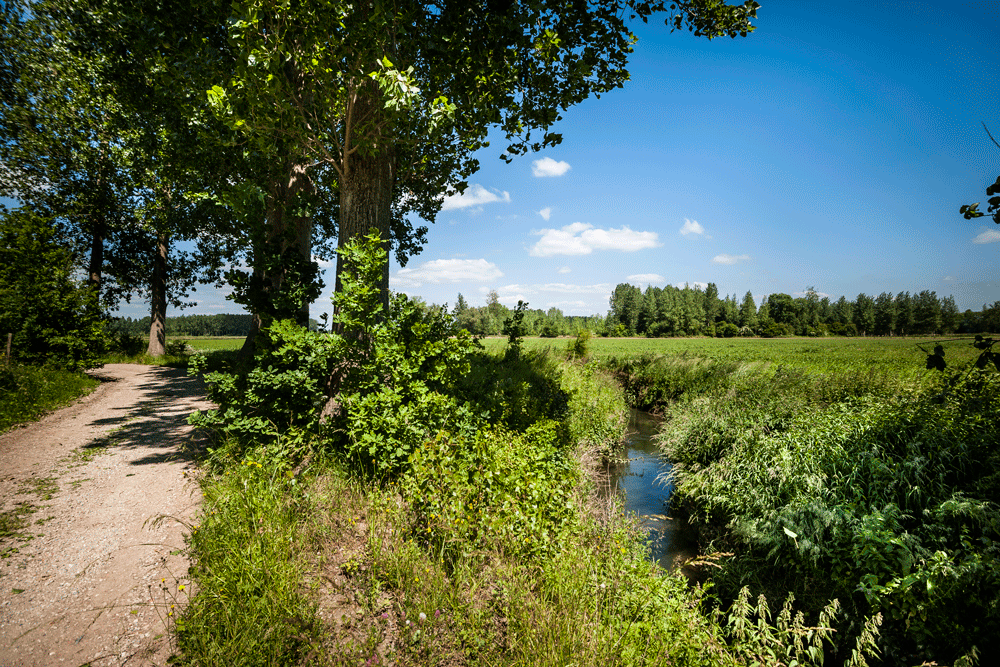 What's the best time of year to experience this route at its finest?

[Mia:] I was born in September and am an autumn child at heart. It's also the season I love best. There’s nothing like the colours of the Gete River Valley then, especially when the autumn sun peeks out from amongst the clouds. However, it goes without saying that every season has its charms. 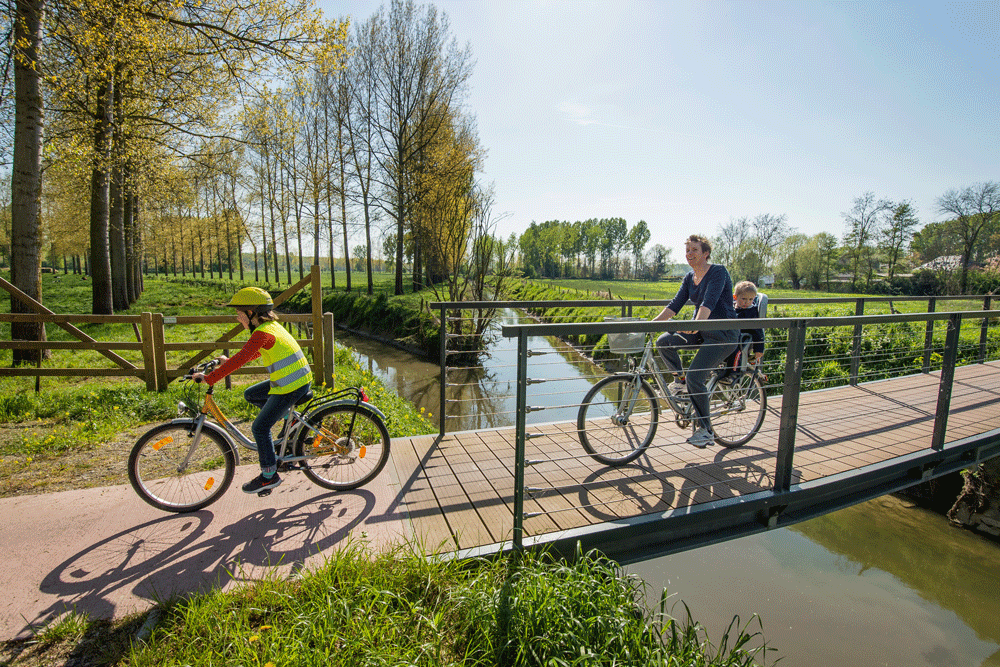 Inspired by Mia and ready to discover this cycling route?
Check the map here!